A few weeks ago I was forced to regress and drive a gasoline powered vehicle on a long journey.  For the most part the journey went well until…I had to stop at one of those archaic “filling stations” to pump dino-juice into the holding tank of the vehicle.

I pulled up to the station and prepared to fuel up my ageing gas powered vehicle.  As I touched the fuel nozzle I grimaced as I thought of the highly toxic and flammable  chemical concoction I was about to pump into the vehicle’s tank and all the nasty, infectious, human germs crawling all over the handle left by who knows who and their drooling, snotty nasal excretion drenched hands…I then thought of how easy it is to fuel my Leaf at home without all the chemicals and germs…pure and simple bliss when compared to this. (*Sources: http://www.forbes.com/sites/jennifercohen/2012/06/12/10-worst-germ-hot-spots/#2cf4f9d578ce  and http://www.reuters.com/article/us-usa-health-filth-idUSTRE79O0G820111025  and  http://www.naturalnews.com/034046_gas_pump_bacteria.html  and  http://cleantechnica.com/2015/06/01/are-gas-pumps-the-dirtiest-thing-that-you-touch/   and   http://www.greencarreports.com/news/1098445_a-gas-pump-is-the-germiest-thing-you-touch-did-you-know )

As I inserted the nozzle into the car’s fuel receptacle I held my breath to avoid inhaling the noxious gasoline fumes then, once the fuel was flowing, I walked to the other side of the vehicle while the tank filled so I could breathe somewhat freely again.

I know to some of you this may seem like overkill but to me it is just common sense and science that has been proven by countless scientists, doctors and Darwin Awardees such as this guy and these idiots  and the several times I have witnessed people smoking while fueling their vehicles, filling up with the engine running and fuel spills at fuel stations.  Everything about gasoline is toxic and dangerous and proof of this scientific fact is written on the gas pump just like it is written on a pack of cigarettes or bottle of booze.

In fact, North Vancouver, Canada has mandated the use of the below warnings reminding the user of the larger dangers of our addiction to fossil fuels. 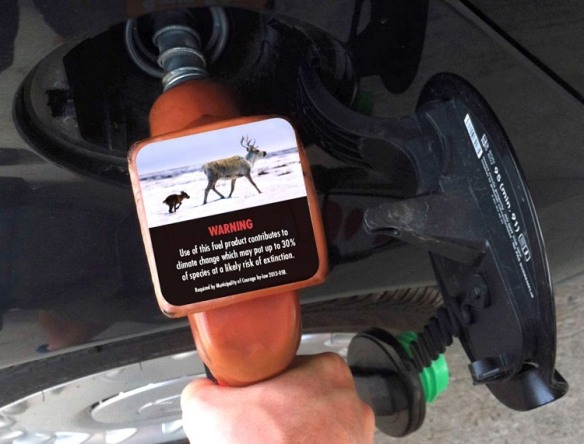 Environmental groups in California are working to get the warnings implemented as well and I firmly support placing these labels on fuel pumps everywhere.

In order to protect my health from these dangerous substances I always take the necessary precautions to avoid them whenever possible and this was one of those times….but this time it became even more bizarre.

As stood waiting for the tank to fill I observed as a rather beat up older model Toyota sedan rolled to a stop at the pump behind the one I was using. From inside the car came deep, thumping sonic vibrations of what I can only refer to as “gangsta rap.” It could be heard everywhere by everyone in possibly a 1000 foot radius of the epicenter at my location…I could even feel the noise deep inside the very bones of my body.  (I wonder what this kind of sonic disruption does to the USGS seismographs in the vicinity?)   Looking at the car and hearing the garishly loud yet incredibly high quality music (stereophonic reproduction not lyrics) that was emanating from the interior of the craft, it was painfully obvious to me that the vehicle’s owner had spent all of his hard-earned money on the stereo system and not any at all on the vehicle. I failed to see how the vehicle was even considered street legal. Subsequently, a young human male of European descent (not that it matters at all but I know someone out there will ask) exited the car. As he opened the door clouds of what appeared to be bluish-white smoke (or vapor) rolled out of the door and into our shared atmosphere. The young human male proceeded to hurriedly fulfill his addiction to fossil fuel and pump gas into his vehicle’s tank. I noticed another person in the passenger seat…from the observable physical features and clothing it seemed to be a young human female – not that that mattered but it was my observation. The individual was reclined all the way back as far her seat would go and she stared blankly at me and I at her…but only for a moment for fear of her or her male partner getting the wrong idea and therefore one or both of them initiating some form of primitive hormone driven posturing and dominance ritual targeted at me. I’m all about some self protection so I averted my eyes from the bizarre scene and walked to the other side of my vehicle pretending to check the air in my tires but in reality I was escaping the bone shattering sound waves and unbelievably insulting and rude lyrics pumping into our shared space from the decrepit vehicle. As I listened I heard prejudice filled insults to at least three different races, horrible insults to women, and a dangerous fascination with colorful metaphors, controlled substances, prescription drugs, alcohol, sex, guns, crime, hate, money and material things. The “song” was truly hideous in every way save for the concert-like sound quality. I briefly thought about asking the youngster to please turn down his music but decided against it based on the song’s lyrics and sadly, based on my observations of the appearance of the vehicle and it’s occupants. I know this all sounds superficial but in reality it is simply science. My observations of the study subjects suggested to me that any action on my part would most likely have an undesirable and opposite reaction initiated by the subject(s) that could be detrimental to my continued health and well being. Therefore I chose to hold my tongue.
In a few moments the youth returned to his vehicle and they sped away in a cloud of toxic smoke, noise, and apparent hostility toward well, everything.

My tank soon filled with the dirty, dangerous dino-juice and I returned to my vehicle and quickly got out of town.

Findings – By driving an EV for almost all of my routine driving needs (approximately 800-1000k/month) I avoid having to stop at gas stations and can easily avoid these undesirable and unsafe situations. How you may ask?

Simple, I most frequently fuel (charge) my EV at the comfort, freedom, and safely of my own home so I very seldom find myself at fueling stations used by the general public. Every evening when I return home after work I plug my Leaf it into the existing 110v wall outlet on my porch and by morning the vehicle is fully charged and ready to go for another day.  Average fuel cost per day/ ~.90 cents!!

When on the road away from home in nearby towns and cities I sometimes do need to use public EV charging stations and outlets.  When this occurs I obviously do run the risk of encountering other people’s nasty music, uncomfortable situations and of course virulent germs.  The risk however is currently almost non-existent and nowhere near the risk found at gasoline fueling stations.   In fact, the times I have encountered other EV drivers at charging stations they have always been friendly, quiet, and willing to share their story and love of driving electric and never their toxic music and germs.  Speaking of germs, of course there are obviously germs on EV chargers and I would hazard a guess (since I have not done an experiment yet to prove it) that the concentrations of pathogens found at gasoline fueling stations would far outnumber those found at EV charging stations.  I base this hypothesis on the fact that the numbers of EV’s and their charging infrastructure are currently less than 1% of the new car market with only around 450,000 plug-in electric vehicles on the roads in the USA and over 32,900 EV charging stations supporting them (not counting private charging stations located at the owner’s homes.)

When it comes to the other side of the coin there are over 260 million petroleum powered vehicles registered on the roads in the USA and over 168,000 stations to fuel them them.

Therefore my research suggests that :

A. Individuals that drive gasoline and diesel powered vehicles are much more likely to become infected with and vector their resident communicable diseases to others due to contact with the fuel delivery apparatus found at “filling” stations. My research and available data suggests that this is due to the larger number of gasoline powered vehicles and their associated fueling stations creating the perfect breeding ground for dangerous pathogens to be transferred from person to person via contact with the fuel delivery device (nozzle).

B. Individuals that drive gasoline/diesel powered vehicles are more likely to find themselves in a potentially distasteful, unsafe and often even life-threatening situation while visiting public use petroleum powered vehicles fueling stations.

C. Individuals that drive electric vehicles and most often charge them at home or use the limited number of public charging infrastructure have a much more limited chance of coming in contact with infectious diseases vectored to them by the fuel delivery apparatus and inherent dangers posed by contact with “shady characters” that are often encountered at “filling stations.”

D. What will the future hold?   With the introduction of the Chevrolet Bolt and Tesla Model 3, new Nissan Leaf, and eNV200 small van (hopefully) and many more, we will most certainly see many, many more EV’s hitting the roads in the next few years.  This will undoubtedly mean many more EV’s on the roads and many more EV charging stations and eventually –similar germ loads as found on fuel pumps at gas stations.  But thankfully much of that can be avoided by charging at home whenever possible.

E. Hopefully, the toxic music and shady characters will also fade into the past along with their old fossil powered cars, toxic fuel and emissions…we can only hope.

Thank you Nissan for the amazing Nissan Leaf. Not only does it give me the ability to avoid unpleasant encounters at the gas pump but better yet it allows me to drive free from the grip of petroleum for the vast majority of my trips. To date I have owned the little EV for almost 3 years, driven over 37,000 gas free miles, passed gas stations thousands of times, and saved thousands of dollars in what I would I would have spent on toxic, life, health, environment and happiness harming gasoline.

One day everyone will be able to break their dangerous addiction to fossil fuels and experience the true freedom of driving electric leading all of us into a fossil fuel free future.